We are old enough to remember when economists, sociologists, and futurologists alike, predicted the end of the long hours culture in favour of a new utopia called the “leisure society.”

The argument ran in the 1960s and 1970s that technology would take away routine and time wasting activities to allow us to enjoy the free time we all deserved. In some ways that happened, but as we freed up time from one domestic chore or another time-wasting office activity, other tasks arose to fill the vacuum. Unfortunately, we were misled.

Similar forecasts have emerged around the end of oil and the decline of automotive vehicle sales—and specifically whether we have reached “Peak Car.”

After the financial crisis of 2007-2009, global automotive sales grew rapidly for over a decade, peaking in 2017 and 2018. The biggest driver of sales growth was from consumers in emerging markets like China, India, South-East Asia and Latin America.

As economies grew, so did people’s requirements for personal transport. For many, a vehicle remains not only a necessary form of individual transport but also a sign of personal achievement, an aspiration, and a major step up for a family compared to a small scooter in a city like Mumbai or São Paulo.

Global auto sales understandably dipped through the pandemic but are on the upswing again as of 2021, albeit constrained by various supply chain challenges and lingering pandemic restrictions in countries like China.

This growth in demand, however, will be tempered by external pressures, most notably related to climate change. Governments, particularly across developed markets, are calling for the end of internal combustion engine (ICE) vehicle sales, with Ottawa setting targets to stop in 2035, and the United Kingdom, France, Spain, Taiwan, Singapore and California amongst others, announcing similar bans on gas and diesel-powered vehicles.

Moreover, growing focus on reducing congestion and emission levels, especially in urban centres, is promoting the wider use of public transport, and adoption of micro-mobility and vehicle sharing and hailing alternatives.

Indeed, many younger cohorts in major urban centres are less likely to own or lease a car, or even apply for a driving licence, than their counterparts even a decade ago.

But does this mean we have reached Peak Car?

According to a recent report from Bloomberg Green, while we may not have reached Peak Car, we have almost certainly reached Peak ICE—in fact, it is already in the rearview mirror, cresting in 2017. 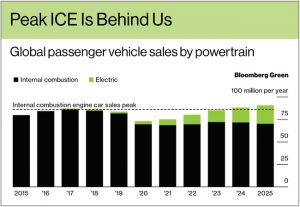 As global sales of electric vehicles (BEVs and PHEVs) accelerate out of the pandemic, the mix of sales is shifting in favour of EVs. While it will take some time before EVs outsell ICE vehicles in most major markets (Norway is the notable outlier at 92 per cent of sales as of March 2022), the reality is that ICE will become an ever smaller percentage of total sales.

Although still lagging the EV penetration of other G7 nations like France (21 per cent), UK (23 per cent) and Germany (26 per cent), Canada’s EV share of new vehicles sold reached 8.3 per cent in the first quarter of 2022, led by BC and Quebec. In fact, EV sales in the major cities of Vancouver and Montreal are approaching one in every five new vehicles sold (Source: IHS-Markit).

Despite government targets, however, the ultimate decision-maker is the Canadian consumer.

While EV demand is growing, the sales trajectory remains unclear. A recent study by J.D. Power found that nearly half of Canadians (47 per cent) have no intention of considering an EV as their next vehicle.

Product: OEMs are increasing the supply of new EV models, both BEVs and PHEV variants, with increased range and quicker charging times. The total range of models on offer, however, remains limited in Canada. Aside from Tesla, most OEMs have only one or at most a few EVs available for purchase and with lengthy wait times.

Affordability: The premium purchase prices of most EVs available for sale today eludes the majority of Canadians. For early adopters, price sensitivity is often secondary to the desire to own new technology, but for the majority, current EV price points are challenging. As BC and Quebec approach the transition from early adopters to early majority buyers, the price gap between an EV and a comparable ICE vehicle will be harder to overcome. Ontario will need to reconsider its “build them and hope consumers buy them” EV strategy. OEMs will need to introduce vehicles in lower priced segments that represent the majority of vehicle sales. 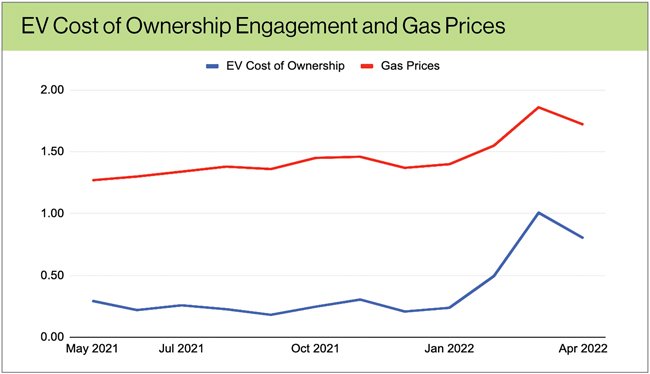 Cost of Ownership: Many Canadians remain uncertain of the costs of EV ownership compared to the ICE vehicles they know. The good news is that recent inflationary pressures are causing Canadians to be more receptive: Clarify State of Charge data reveals that as gas prices increase, there is a corresponding increase in social media engagement on the topic of EV cost of ownership. But the math is not always fully understood—this represents both a need and a great opportunity for OEMs and dealers to educate interested prospects, especially given that gas prices are expected to remain elevated for the foreseeable future.

Charging Infrastructure: Range anxiety remains a challenge, but charging anxiety may be the real challenge for OEMs. Today, Canadians have access to over 16,000 public charging points, well below international comparisons, especially considering the huge geographic expanse of our country. As EV sales increase, pressure on the infrastructure will grow. Or, perhaps, EV growth will remain below its potential until the charging infrastructure grows. Chicken or egg? Indeed, many Canadians living in multi-family buildings have limited access to home charging. Avoiding charging anxiety will be an important barrier to overcome for many Canadians.

So what does all of this mean for Canadian dealers? The answer: it’s complicated. With Peak ICE behind us, dealers will need to operate with a foot in both camps—ICE and EV—for some time to come in both sales and after-sales.

Customer needs and expectations are different, not only between ICE and EV customers but across the EV adoption curve as dealers in BC and Quebec enter the “early majority” phase of the adoption curve.

So while the tide is indeed turning, dealers need to carefully measure the hype against the reality, especially with their brands—and perhaps most importantly for the customers in their markets.

EV leadership, though, will have to come from the top. Your teams will watch your interest and curiosity with EVs, and will act accordingly. Make sure to talk with your customers and gauge their interest and hear their concerns. Only then can you know the issues they are facing and develop strategies for your sales and service teams to address them.

An EV future is coming. It just won’t arrive all at the same time across Canada.